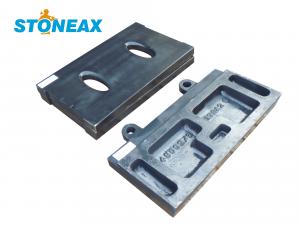 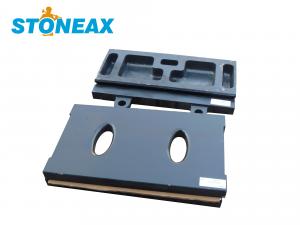 1)Main material: Cast Iron.
2)Product Advantages:
Jaw crusher toggle plate (or toggle plate ) is an accurately calculated cast iron piece. It is not just a force transmission element, but it is also an insurance part of the crusher. When the crusher falls into the uncrushable material and the machine exceeds the normal load, the toggle plate breaks immediately and the crusher stops working, thereby avoiding the damage of the entire machine. The toggle plate and the toggle seat are in rolling contact mode. Under normal use, there is little friction. Just apply a layer of grease on the contact surface. The entire part is used to adjust the size of the discharge opening and to compensate for wear between the jaws, toggle plate and toggle sest.
3)working principle:
Performance advantages,

1. The properties of cast iron materials are brittle and easy to break, making the crusher's perception ability more sensitive and the protection effect greatly enhanced.

2. Its working principle is that when the liner is subjected to excessive pressure, the liner breaks, thereby effectively protecting the forehead.

3, cast iron toggle plate version is a recognized, commonly used and effective, the most frequently used in the security measures of the jaw crusher machine.
4)Functional use:
A mechanism for adjusting the size of the discharge opening and compensating for wear between the jaw plate, the toggle plate and the toggle seat.

Thank you! Your message has been sent to the following suppliers.